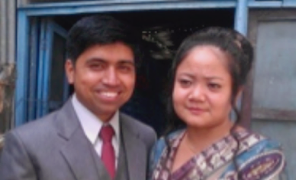 Nepal is one of the world's poorest countries, with one-third of the population living on less than one US dollar per day. The first church was formed in 1952 with 29 Christians. In spite of anti-conversion laws and intense persecution from the Hindus, in 2010 there were 850,000 Christ-followers in nearly 10,000 groups. This was achieved by willingness to suffer for the gospel, profound prayerfulness, and a Nepali-driven long-term commitment to evangelism and church planting.

Bijay was pastor Wade's translator for one week in 2013 in Trivandrum, India. Bijay writes, "Pastor Wade, I am so delighted to know that your church is a lively church and a mission minded church. My age is 30 and I am married to a beautiful wife named Jyoti, who teaches in a school. We haven't any children yet, but we have been praying for this. I and my parents were Hindus in the beginning but by God's timely grace we all believed Jesus as our only Savior. I became a Christian at the age of 12 and then took water baptism by immersion. I pastor a local church with 20-25 members. I live in Nepal in a city called DAMAK which is in the eastern region nearest to the border of India."

The investment that Grace Fellowship makes in this young man's ministry will multiply disciples and extend the kingdom of God throughout Asia.

Join us Sunday at